A beautiful, alternative way to explore the landscape of Kenya 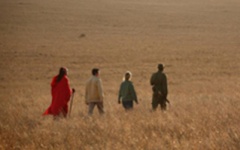 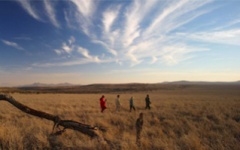 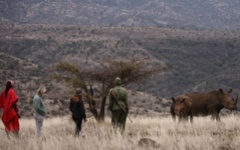 There are a variety of national parks and reserves in Kenya so there is no shortage of game viewing opportunities and activities. Of course, game drives are the main activity for safaris in Kenya, but the country is lucky to have vast expanses of land which make other (and arguably, more exhilarating) activities possible. These include camel riding, horse riding, tubing, helicopter rides, community visits, hot air balloons and many more. However, an activity that Kenya has started to offer more and more, (where possible) is a walking safari.

Walking safaris are prohibited in most of Kenya's national parks and reserves, such as the Masai Mara Reserve, Samburu and Tsavo. However, walking safaris are permitted, and are becoming more popular in surrounding conservancies, private ranches and wildlife concessions around the country.

Although countries like Zambia and Zimbabwe take the fame for walking safaris, bush walks in Kenya are a great way to explore the landscape in a more intimate way. Walking guides will emphasize the smaller things in the bush – the flora and fauna, the footprints, the culture and the scenery. Whilst big game is not always seen on a walking safari, the thrill of being on foot in the bush is like no other.

There are a few camps and destinations in particular in Kenya that offer great walking safaris. Here is a guide to our top five camps:

Sosian is situated in the central area of the Laikipia Plateau, on its own private ranch. With access to a huge area of land, Sosian has great game viewing and activity options including a bush walk. What Sosian offers on a walking safari is the diversity of landscapes - there is a beautiful walk that takes you along the small waterfalls on the Ewaso Narok River, where there are natural plunge pools and stunning forests to explore.

Saruni Samburu is situated in the heart of the Kalama Community Wildlife Conservancy, beyond the boundaries of the Samburu National Reserve. The highlight of this area is that it has such a breathtaking amount of space. The property itself sits on an incredible cliff top and the views are simple indescribable – you can see for miles. The view alone makes you want to walk as far as you can see and to some extent, that is possible!

Although there is no walking permitted inside the Masai Mara Reserve itself, the conservancies surrounding the reserve are allowed to offer bush walks. One of which is the Mara North Conservancy which Elephant Pepper Camp sits in. Bush walks in this area go focus on the flora and fauna, including the famous ‘elephant pepper’ trees that grow in and around the camp. Its leaves and fruit have a fiery flavour, and along with many medicinal goods, the elephants definitely take a fancy to it!

This camp is situated in a conservancy called Kitirua, bordering the south west of Amboseli National Park. This conservancy is private so the camp are able to offer a variety of activities including walking safaris. The main reason this camp is on our top five list is the view! From the conservancy, you can see stunning sights of Africa’s largest mountain, Mount Kilimanjaro in Tanzania; what a backdrop for a walking safari!

Our final top property for a walking safari in Kenya is Lewa Safari Camp. With privileged access to 65,000 acres of private land, Lewa Safari Camp is a great base to be incredible game viewing and a wealth of other activities. Hosting 10% of Kenya's rhinos, Lewa Conservancy, its guides and its rangers all work together to protect the endangered species and the other wildlife it famously homes.

When to go on a walking safari in Kenya:

Probably the most photographed park in East Africa, Amboseli National Park lies on the border between Kenya and Tanzania, in the lee of the majestic Mount Kilimanjaro. Comparatively quite small for a National Park, at 392sq km, it is also the second most visited of them all. This is to its benefit...

The Lewa Downs is a stunning valley set in the middle of the Laikipia Plateau, deserving of a special mention, as it features probably the second best game viewing in the country. Only offering a handful of lodge choices, has become famous for the wide variety of rare and beautiful game species it...

Samburu National Reserve is certainly in amongst the more well-known of Kenya's parks and accordingly has become relatively busy over the years. The main areas for game viewing are along the banks of the Ewaso Ngiro that runs east to west through the park. A great location as the surface waters dry...

The Laikipia Plateau in Kenya is characterised by a patchwork of interlocking ranches and rolling red plains. Featuring a wide variation of stunning lodges, all unique in their own way, the region offers good game viewing along side a whole host of family friendly activities. Often featured in...

Spanning approximately 3,000 sq kms, the Masai Mara National Reserve and Greater Mara Concession Areas form the northern section of one of the most astounding animal migrations on the planet. While the region has become busier and busier over the last decade or so, a visit to this stunning area is...